In this article we examine a desktop lamp which is available in many shops, for example in the stores of the "Ikea" chain. 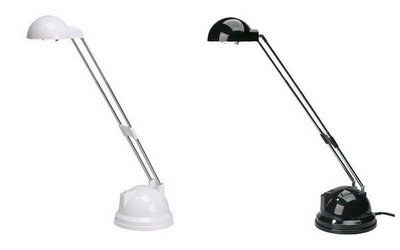 The lamp has a simple and attractive design. The parts made of plastic are of a good kind of plastic, very tough and resilient. But these are the only positive aspects of this product, because there are lots of negative aspects.

First, the transformer required to lower the AC input voltage from 220 V to 12 V is encased in the lamp's base, without any magnetic shield of course. The designers have been very smart because the transformer in the base works also as a weight to keep the base on the table when the lamp arm is bent.

The transformer not only creates an AC magnetic field with the frequency of the electric network (50 Hz in Europe), but also AC magnetic fields of many other frequencies that can be find in the electric power of a building, especially if there are switching power supplies attached, for example computers, laptops etc...

Then there is the lamp's arm which is composed by two extensible linear antennas, yes, the same that are used for radio and TV. This wouldn't be really bad if the tubes were used only as a mechanical support for the lamp, but the smart designers of this product thought that the two sticks could also carry the power from the transformer to the incandescent lamp, allowing to remove the floating electric cable. The fact that this product has been admitted to be sold to the public in Europe is simply incredible.

Every kid with the basic knowledge of electric circuits could say that if a metal object touches the two sticks at the same time then a short circuit is created at the secondary loop of the transformer, which can heat up in few seconds for this and damage irreversibly. Besides this, the voltage is 12 V AC, which means about 17 V of peak value, it is not really harmful, but it is neither totally insignificant for the human body.

It seems that the resellers of this product have added a little label to the lamp that tells to not put metal objects across the two antenna sticks.

There is also the problem of the electric cable that goes into the base, it carries 220 V AC, and it would be near the user since the base has to be on a desktop.

But the two parallel antenna sticks carrying AC currents create also an AC electromagnetic field which is much greater than that of a simple pair of adjacent copper wires, and this is really too much.

The first time we turned on this lamp on our desktop we instantly felt the strong radiation coming from the antenna sticks. The lamp was discarded a minute later and never used again. Currently we have dismantled it and used the pieces to build an EMF free desktop lamp prototype.

This product should not exist at all. Their producers and designers should have their licences closed.

One may say that this happens because it is a very cheap product, but it's not so, this is not the only desktop lamp in commerce that uses the metal support to carry the current. Many designers of desktop lamps have used the metal arms of the lamp also as part of the electric circuit. We can only suggest you to be aware of this when you buy a desktop lamp.

There are other desktop lamps however that do not have a transformer and bring the 220 V voltage directly to the lamp, with a simple twisted cable. In these lamps the arms can't be used to carry the current because the voltage is too high and dangerous, but the cable creates a strong AC electric field. Also the incandescent lamp creates an electric and magnetic field, and such lamps are used to work at tables or desktop with the user's head very near to the wires and the lamp.

Finally, notice that electromagnetic emissions come also from ceiling lamps, a desktop lamp is more harmful because it is nearer to the user's body, but even emission from the ceiling lamp should be reduced as more as possible.