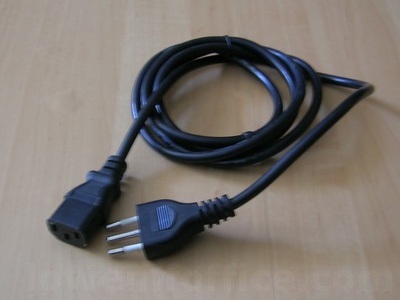 Power cords sold with the equipment are robust and durable, have a very good electric insulation but they are very bad for what concerns electromagnetic emissions.

A power cord contains three copper wires, one of them is connected to the ground terminal, one to the line and one to the neutral.

When the plug is inserted in the electric socket in a home or a office the line wire gathers an electric charge, even if the other end of the cable is disconnected.

The electric charge on the line wire varies in time at the same rate of the mains voltage, which in Europe is sinusoidal at 50 Hz and in USA 60 Hz.

The electrically charged conductor has an electric field around itself, in this case the electric field is distributed almost in the same way of a static field but with the difference that here the field varies oscillating at the 50 Hz frequency (or 60 Hz depending on the country).

In addition to the main oscillation of 50 Hz the electric network transmits to the cable many other electrical oscillations of variable frequencies and powers, which may be different from building to building and also in different sockets of the same building.

The variable electric charge on the cable means also a small flow of charge, so in the disconnected cable there is also a small current that produces a small magnetic field which oscillates at the same rate of the charge.

Both the electric and the magnetic field generated by the power cable are very bad for human health. At short distances from the cable the electric field is of several hundreds V/m and quickly provokes inflammations in biological tissues. At a distance of the order of a meter the effects are smaller and interest mainly the nervous system and the brain.

In case an unshielded power cable is few centimeters away from the legs of the user, who sit at the desk for example, the user risks to develop an inflammation of some muscle, tendon or bone in that point, not to mention many other general ailments.

Problems caused by near metallic objects

If the non-shielded power cable hangs very near a metallic structure like the computer box or a metal furniture, it induces vibrating electric charges on the metal surface which propagate the electric field to a wider region. 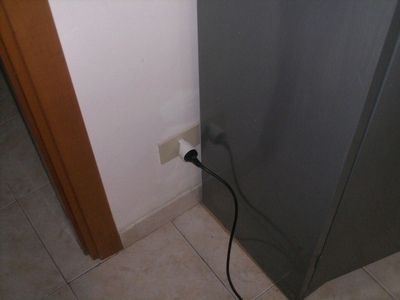 Because the power cable is connected to the mains socket there is no limit to the amount of charge that the cable and the other objects can collect, thus a set of many metal objects may be charged and have an electric oscillating charge and electring field around them.