One of the sources of electromagnetic radiation is the ADSL system. The EM radiation comes from the phone line into the room, and it is also generated by the ADSL modem and diffused by the ADSL filter.

To avoid the EMR coming from the ADSL wire, modem and filter, we tried to move our workstation to another room, leaving the ADSL wire, modem and splitter at the farthest corner of the room where the wire arrives from outside, and to connect the computer in room 2 to the modem in room 1 by means of a network link based on plastic optical fiber ( POF ). 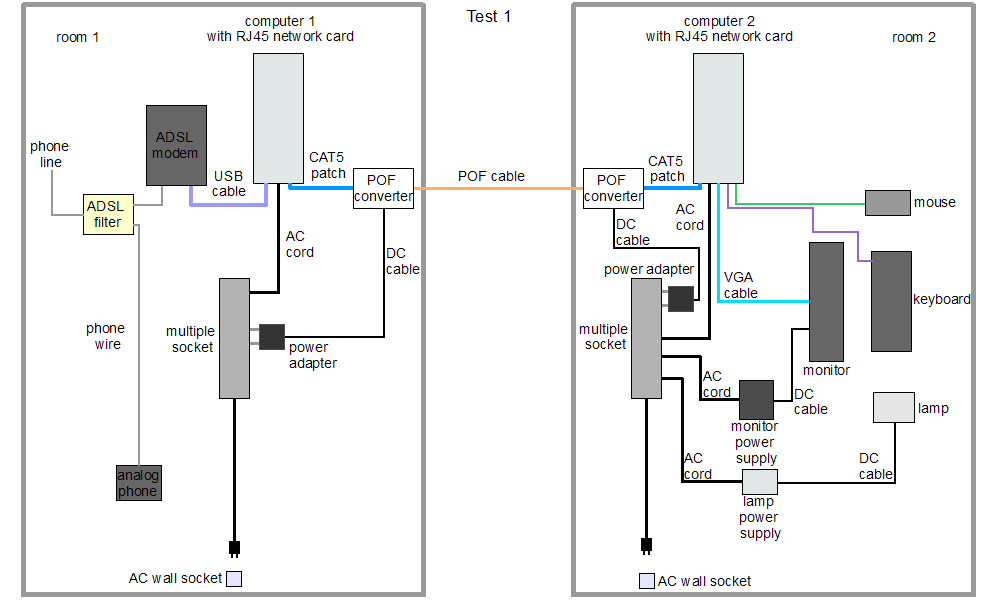 The external POF converter is connected to the computer by means of a patch of standard network cable, with RJ45 plugs. This piece of cable is Cat5 type so it is not shielded at all. As we know, even Cat7 cables, which are doubly shielded, have still electromagnetic emissions. The external POF converter has also a separate small power supply, and we know that these small devices are terrible in terms of electromagnetic noise.

In summary, this system should avoid that the electromagnetic radiation generated by the ADSL modem, and coming from the ADSL line, reached the second computer placed in room 2.

Notice that if the ADSL modem has at least one RJ45 port then it can be connected to the POF converter, and so there's no need of the first computer. We are going to try the modem with POF converter attached to it soon.

This system can also be improved by enclosing the modem, the POF converter, and all the small power supplies and patch cables into a suitable metal enclosure. Ideally such enclosure should have just the ADSL wire entering on one side and the POF cable exiting on another side, with one power cord only that brings the AC power to the power supplies of the modem and of the POF converter.

The result in terms of perceived electromagnetic radiation has been good. For the first time we have used a two-computers network without having any electric wire from a room to the other. The second computer had internet connection without any Cat5/6/7 cable or any phone wire.

We noticed however some problems due to the external POF media converters, their power adapters and their Cat5 patch cables. These problems have been canceled in our second test of POF networks.

In our second test of Plastic Optical Fiber components for reducing the electromagnetic radiation in the office, we replaced the external POF media converters with internal POF network cards. This is possible only for desktop computers. We also changed the ADSL modem to a small ADSL modem router with 4 ports. We used two POF media converters connected to the router to bring the internet connection to two computers by means of POF cables. 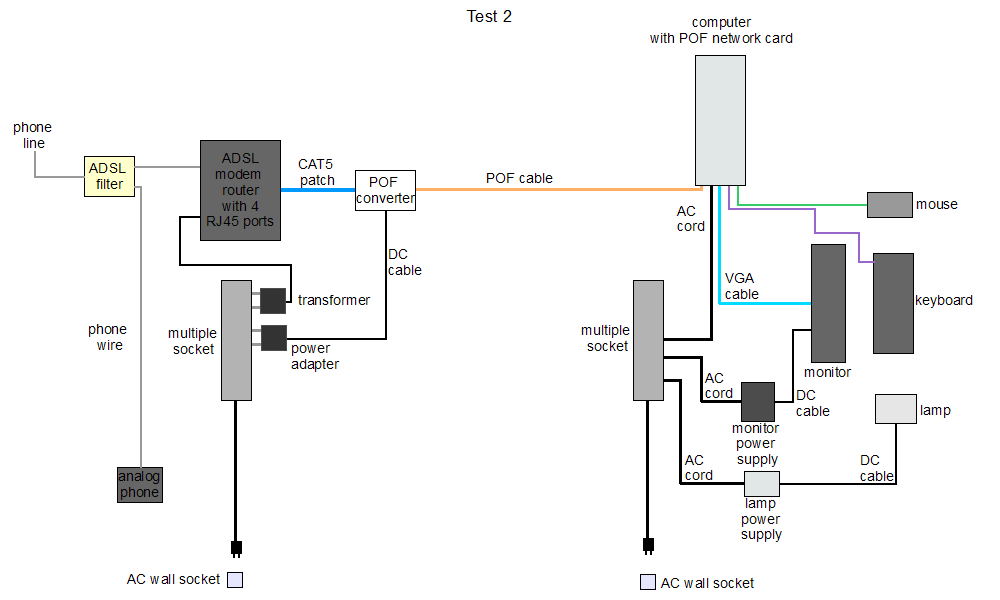 This solution has the maximum advantages of EMR reduction that POF technology can provide. We have the optical cable between computers, or between computer and modem-router, and all the electronic boards are enclosed in a metal case.

This solution however had still the electromagnetic emissions of the modem and router, its power adapter and the POF media converters attached to it. For this we have to move the group of devices and cables to another room, or build a good shielding enclosure that contains them all.

In our third test of Plastic Optical Fiber components for reducing the electromagnetic radiation in the office, we tried the external POF media converter with USB interface on one computer. Instead of using the internal POF network card we connected the computer to the POF cable by means of this media converter, which is external, and is connected to the computer by a short USB cable, and it has no power adapter. 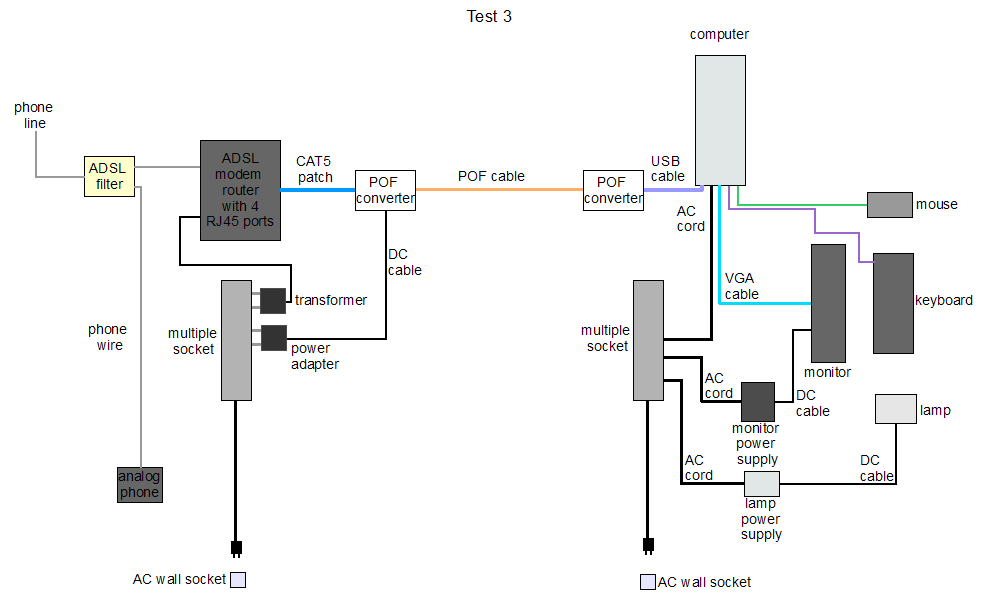 In practice we don't recommend this type of POF converter for stable computer networks. This device can be useful for temporary connections of portable computers that cannot have the internal POF network card. But if you want to avoid the electromagnetic radiation then it is better to avoid this type of device too, otherwise for portable computers we could use wireless networks, which we don't use because of their electromagnetic radiation.